Malware
Malware is an abbreviation for “malicious software”, that is software with malicious intent.

WiFi
WiFi is short for Wireless Fidelity, a networking technology using microwaves instead of wires. Since the beginning there has been light. We’ve used it for many applications over the years, the most basic being to allow for sight. Light has also been used as way of communicating for centuries. In more recent decades light has become an essential part of high speed digital communication, in the form of fibre optics. Fibre optics allows for lots of data to be sent, very quickly, all over the world, using very long glass cables. However fibre optics can be expensive and still requires cables, which sometimes can be useful for security, but not always practical.

Recently researchers have discovered a way of using light for wireless communications as well. They have dubbed it LiFi or Light Fidelity. It works using LED bulbs, similar to ones emerging for use in homes. You will be able to use the same, specially configured, light bulb to light your room and act as a LiFi Access Point.

Click on the diagram to find out more about how LiFi could work.

LiFi works by turning LEDs on an off again, at a speed that is subtle enough to not be detectable by the human eye, but still slow enough for the receiver. Due to the vast amount of colours or wavelengths there are in the visible light spectrum, many numbers of LiFi channels are available. This means that plenty of data can be transferred simultaneously using multiple channels.

What if I Want to Turn the Light Out?

Thankfully the boffins are already onto this problem. They are currently working on a way of dimming the LEDs to the point that you cannot see the light coming from them, but the computer LiFi receiver can. Clever stuff!

Advantages of LiFi over WiFi

Radio masts are very inefficient and require vast sums of power in order to broadcast and in some cases keep them cool enough to operate. LEDs on the other hand use very little power (much less than a fluorescent bulb), meaning LiFi also uses very little power. At the same time LiFi can also light a room, meaning it can do two jobs for the price of one.

The radio frequency is running out of “free” channels that we can use. The visible light spectrum, which LiFi uses, has vastly more potential channels and therefore would help solve this problem.

LiFi is Safer to Use

WiFi and other radio waves can be dangerous to use in some places, such as areas with flammable gas in the air. Light on the other-hand is used in these areas and is known to be safe, therefore LiFi is a viable technology that could be used.

Microwave wireless devices, such as mobile phones and WiFi routers, have much evidence to suggest they have negative health effects. Natural light is essential to life on earth and known to be safe. LEDs were invented by Oleg Losev in 1927 and so far appear to be safe also, therefore LiFi should be much safer than WiFi. 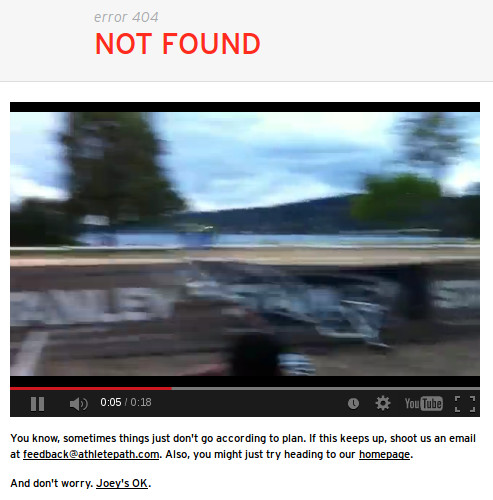 Error 404, that very annoying page that you hit when a web page cannot be found. Mostly very boring and irritating, but is it always going to be that way? This short video from TED suggests that maybe the Error 404 page is turning into something less boring and more sympathetic. Traditionally the Error 404 page had only one purpose, to deliver the sad news, that the page you really wanted could not be found, however as Renny Gleeson illustrates, for some websites, Error 404 pages are becoming a little more interesting.